Home > Exhibitions > Lisa Borgiani “What is Europe to you?”
Photography

Lisa Borgiani “What is Europe to you?”

A Journey through European Images and Voices

“What is Europe to You?” is an ongoing photographic narrative created by artist Lisa Borgiani, who since 2019 has been visiting the principal European cities and capitals, asking the inhabitants she photographs a simple question: “What is Europe to you?”

A photographic journey that stems from the author’s need to understand how European citizens feel about Europe and which, on the occasion of Europe Day 2022, has been transformed into an exhibition curated by Gigliola Foschi.

An opportunity for reflection to raise awareness and to offer visitors the chance to express themselves on the topic.

“We want to continue to believe that we can build Europe together by adopting the strategic vision of great men like Adenauer, Schuman and Monnet, who always believed in constructing a united Europe that began first and foremost from local territories and regions,” says Alessandro Fermi, president of the Lombardy Regional Council.

Designed to be shared and experienced, the exhibition sees on display 60 photographs, 85 black and white self-portraits of the project’s participants, 12 collages, as well as installations and a video showing the development of the work.

Each visitor is invited to participate in the project in two ways: at the exhibition they can use the WEYWALL digital platform to print and exhibit their own self-portrait accompanied by a comment expressing their feelings about Europe, or they can write a phrase about Europe on a brightly coloured Post-It, which they can then stick on a dedicated wall.

“The exhibition stems from a desire to ask visitors, especially younger ones, to take part in and be part of the work itself,” stresses Gigliola Foschi, “freely expressing their feelings about Europe and leaving a trace of their participation.”

“What is Europe to You?” is a story in images that has taken Lisa Borgiani to various European cities: in 2019, accompanied by journalist Marta Ottaviani, to Athens and Berlin, in 2020 to Milan and Rome, in 2021 to Paris and the island of Ventotene, and in April of this year to Budapest.

After the exhibition in Milan, Lisa Borgiani will resume her journey around Europe, starting from Brussels, Madrid and Vienna.

“What is Europe to You?” is an artistic journey in search of feelings which are expressed through a dialogue between the images and the words of the individuals encountered, without any distinction of nationality, sex, profession, religious belief or social and cultural background.

In a Europe where the need for cohesive political, economic and social choices is increasingly imperative, Lisa Borgiani’s project shows what European citizens think and what their desires and criticisms are: a set of often conflicting opinions emerges where words like chaos, failure or nothing are contrasted with concepts like inclusion, opportunity, freedom, peace, hope, and beauty.

“What is Europe to you?” is thus a journey of discovery through European citizens’ feelings about Europe.

A message of hope for the future,because Europe  means above all “democracy,” and democracy means participation: a place where everyone feels free to express their opinions and confront them with those of others, even those beyond their own geographical borders.

The exhibition at Pirelli Tower is accompanied by a catalogue edited by Gigliola Foschi and published by the Lombardy Regional Council Press Centre, graphics by 045 Publishing. 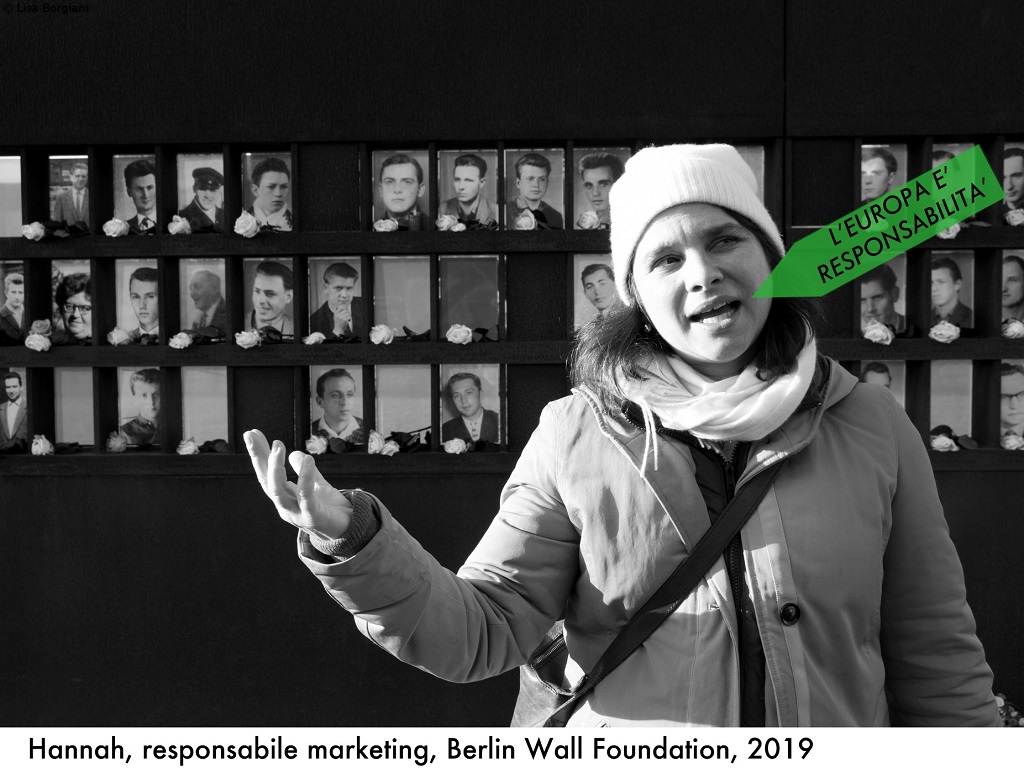